If you are wondering if a disease can cause all your joints to hurt, Lyme disease is most likely the answer. An infection caused by bacterium carried by deer ticks, Lyme disease can be effectively treated with antibiotics when caught early. However, when undiagnosed and left untreated, the infection can potentially spread to your nervous system, heart and joints, resulting in a complex and debilitating disorder that is more difficult to treat.

How Do You Get Lyme Disease? 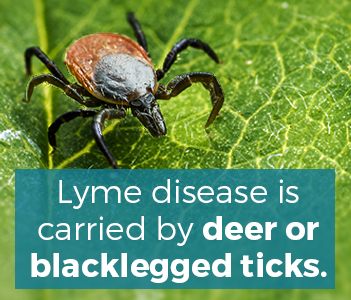 In the U.S., Lyme disease is carried primarily by deer or blacklegged ticks, and it is caused by the Borrelia mayonii and Borrelia burgdorferi bacteria. It’s easy to be bitten by ticks in high-risk areas such as Central PA. The creatures are often no bigger than a poppy seed, so they are very difficult to see before they latch on.

However, not all ticks are Lyme disease carriers. To contract the disease, an infected tick needs to bite you. Bacteria from the tick will eventually make its way from the bite through to your bloodstream, usually taking between 36 to 48 hours. For this reason, whenever you’ve been in the outdoors, particularly in a known tick-heavy area, you should always check your body for parasites before you come back inside.

In the two primary stages of life, U.S. deer ticks feed on rodents, which are a prime source of the bacteria that causes Lyme disease. Ticks move onto feeding primarily on white-tailed deer when they reach adulthood.

If you find a swollen tick attached to you, it could have fed for long enough to transmit bacteria and should be removed with tick tweezers as soon as possible to prevent infection.

Where you vacation or live, as well as what outdoor activities you participate in, affects your likelihood of being exposed to Lyme disease. Common factors that put you at risk of contracting Lyme disease include:

The Centers for Disease Control and Prevention notes that older adults and children are most susceptible to the disease, along with others, like park rangers and firefighters, who spend time outside.  It’s estimated that 300,000 people nationwide are diagnosed with Lyme disease each year.

Facts About Lyme Disease in PA 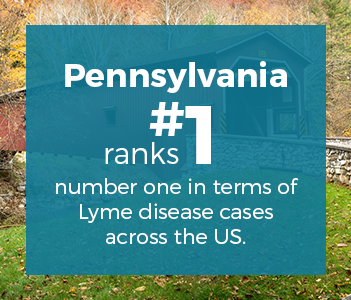 Ticks thrive in the countryside of Pennsylvania in particular, and according to a study published in the Proceeding of the National Academy of Sciences of the United States of America (PNAS), Lyme has a greater likelihood of occurring where suburban developments encroach on existing forest. This is thought to be because the white-footed mouse that is the most important animal in the Lyme disease transmission cycle can live without too many predators under these circumstances.

Notable statistics of Lyme disease in PA include:

What Are the Common Symptoms of Lyme disease?

In the early stages of infection, symptoms of Lyme disease are very similar to a mild flu, including

For some people, a telltale sign of the disease is the red bull’s eye-shaped skin rash that presents in some, but not all sufferers, within three to 30 days after being bitten by a tick.

Often, these first signs are missed when you’re infected with Lyme disease and are dismissed as the flu or some other virus. This is very worrying because if antibiotic treatment isn’t begun when the first signs of the disease present, your condition can become more serious.

Joint pain is another issue that can occur with Lyme disease. In the worst cases, over several weeks, nervous system and heart issues can develop. If left untreated, you may suffer from arthritis and neurological issues.  In fact, according to the Arthritis Foundation, when Lyme disease is untreated, more than half of all sufferers will develop sporadic arthritis bouts. 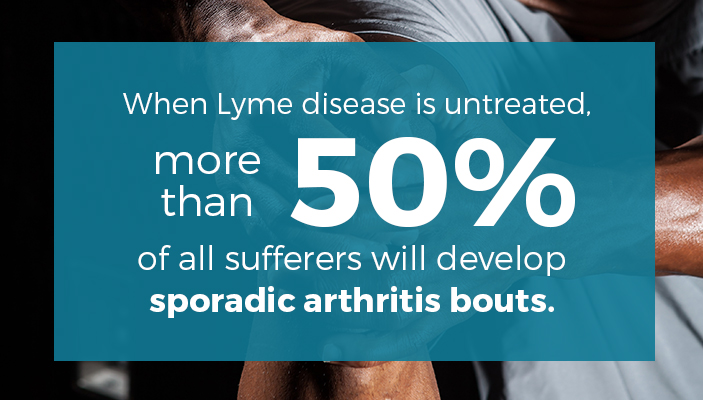 You can expect a small, red bump on the site of your bite, or where you removed the tick from, and this will resolve within a day or two. This is to be expected after being bitten by any insect, and it in itself is not an indicator that you have Lyme disease.

However, if you have been infected, you can expect the following within a month or so:

If you don’t seek treatment, other symptoms and signs of infection may appear over the following weeks and months, including:

You may also suffer from:

Many weeks after infection, some people develop:

The Progression of Lyme Disease 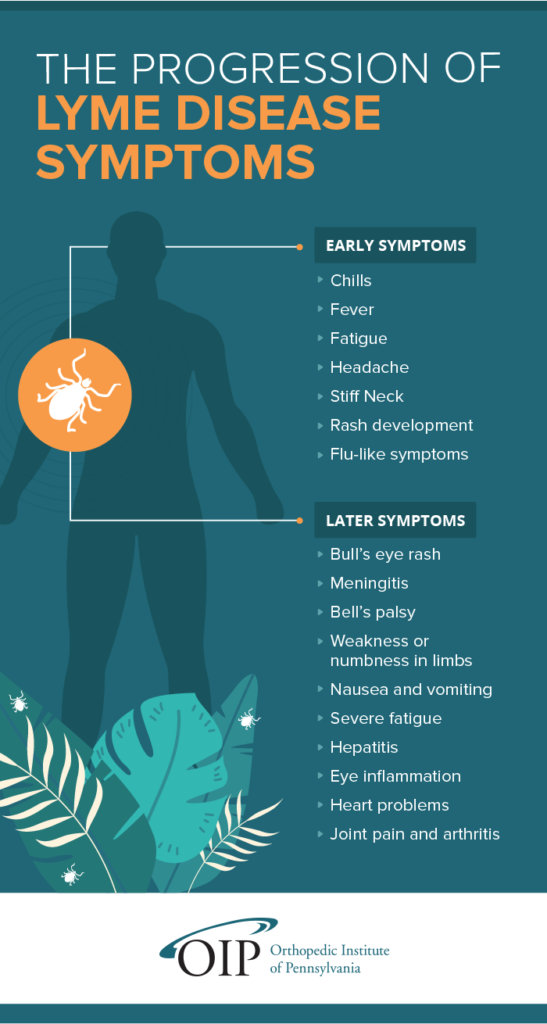 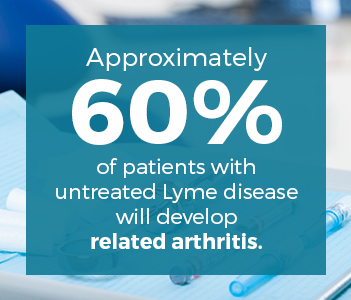 Lyme disease and joint pain unfortunately go hand in hand, as Lyme-related arthritis is commonly found in Lyme disease sufferers. If you have Lyme arthritis, you have swollen, painful and aching joints that cause stiffness and pain. It is found in people who are in the late stages of Lyme disease. According to an article in Science Daily, approximately 60 percent of patients with untreated Lyme disease will develop related arthritis.

Lyme arthritis is caused by the bacteria that causes Lyme disease getting into your joints and causing inflammation of your tissues. Over time, this can cause damage to your cartilage. Most cases of Lyme arthritis are short-lasting and affect only one large joint.

Lyme arthritis can affect your:

In the U.S., it’s estimated that about 60 percent of untreated Lyme disease patients will experience intermittent episodes of swelling and lyme disease joint pain for months to years after they are infected by a tick bite.

Thankfully, most Lyme arthritis cases can be treated with antibiotics and NSAIDs, although some people may require surgery to remove some diseased tissue. Around ten percent of untreated patients may go on to develop chronic arthritis, reports Johns Hopkins Arthritis Center.

How Is Lyme Disease Diagnosed?

As the symptoms and signs of Lyme disease are similar to those found in other conditions and are nonspecific, diagnosis is not easy. In addition to this, the ticks that spread the disease can also transmit other diseases at the same time.

Diagnosis is easier when your doctor can see that you have the characteristic bull’s eye rash. However, if you don’t, your doctor will ask you about your medical history, whether you’ve been outdoors in summertime, where you have been outdoors and will give you a medical examination.

Lab tests enable bacteria antibodies to be detected in order to confirm a diagnosis. They are most reliable when you’ve had the infection for a few weeks, as your body will then have had the time to develop the antibodies.

Tests for Lyme disease include:

Although the test may not show as a positive result during the first stage of Lyme disease, often the accompanying rash is distinctive enough to make the diagnosis, especially if you’ve been in an area where Lyme disease-transmitting ticks are common.

How Is Lyme Disease Treated?

Generally speaking, the earlier and more quickly Lyme disease is treated, the quicker and more complete your recovery will be.

Antibiotics are used to treat Lyme disease, and they include:

The usual length of a course of antibiotics for Lyme disease is between 14 and 21 days.

Intravenous antibiotic treatment often causes a range of side effects, including:

Even though there is a risk of experiencing these side effects, it’s imperative to undergo the course of treatment your doctor prescribes to avoid the serious complications Lyme disease can have.

It’s important to remember that even after you’ve finished your treatment, you may still experience other symptoms, like fatigue and muscle aches. This is known as post-treatment Lyme disease syndrome, and the cause of the condition is as yet unknown.

When a patient with Lyme disease presents with joint pain symptoms, they may be suffering from Lyme arthritis. If antibiotics are not used to treat Lyme disease, there’s a good chance that a patient could develop Lyme arthritis. For most people, once the underlying bacterial infection is treated, the associated arthritis also resolves with no additional treatment required.

However, in some cases, even when the Lyme disease is treated with oral or intravenous antibiotics, the arthritis persists. This is known as antibiotic-refractory Lyme arthritis, which means patients may need medications that treat the pain and inflammation associated with arthritis. The main way that doctors determine if a patient has arthritis despite being treated for Lyme disease is the persistent inflammation that causes joint pain.

It’s believed that patients with antibiotic-refractory Lyme arthritis are more susceptible to excessive inflammation due to two factors:

Whatever the cause, Lyme arthritis that continues to cause joint pain after antibiotics have been administered will require additional treatment to help sufferers manage their symptoms. Some of the most common treatments that may be attempted include:

If you would prefer to treat your arthritis symptoms naturally without medication, there are a few options you can try:

Your doctor may even recommend physical therapy to increase joint flexibility and muscle strength so that you can more effectively manage painful symptoms.

How Can You Prevent Lyme Disease?

The best way you can avoid Lyme disease in central PA, and indeed, anywhere there is a risk to human health, is to avoid walking in brushy, wooded areas with long grass. Other precautions you should take include:

If you’re visiting anywhere that might have an active tick population, it’s important to be proactive about checking your family and pets for ticks. Deer ticks can be as small as a pinhead, so it’s imperative to be vigilant. Areas to particularly focus on checking are behind and in your ears, behind your knees, under your arms, on the back of your legs and anywhere else a small arachnid could escape detection. Also, the following precautions may help you find a tick before it’s too late:

When it’s caught and treated as early as possible, Lyme disease can be fully treated, saving you from potential complications like arthritis and joint pain. You and your family can be tick aware while still enjoying the great outdoors and protecting your health.

If you have Lyme disease and you’re currently suffering from joint pain, contact us here at Orthopedic Institute of Pennsylvania (OIP) for an appointment.